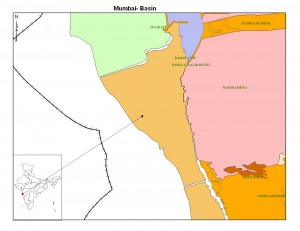 Konkan in the south.

Category of the basin
The basin falls under the category I, which implies that the basin has proven commercial productivity.

Age of the Basin & Sediment-thickness
The age of the basin ranges from late Cretaceous to Holocene with thick sedimentary fill ranging from 1100-5000 m. Though possibility of occurrence of Mesozoic synrift sequences in the deep-water basin have been indicated by the recently acquired seismic data by GXT, it needs to be further ascertained by future studies.

Exploration history
Exploration in the Mumbai Offshore Basin started in the early sixties when regional geophysical surveys were conducted by the Russian seismic ship. The first oil discovery in this basin was made in the Miocene limestone reservoir of Mumbai High field in February 1974. Subsequent intensification in exploration and development activities in this basin have resulted in several significant discoveries including oil and gas fields like Heera,Panna, Bassein, Neelam,Mukta, Ratna,Soth tapti, Mid Tapti etc.In addition number of marginal fields like B-55, B-173A, B-119/121, D-1 and D-18 have been put on production in the last decade.

Type of Basin
Mumbai offshore is a pericratonic rift basin situated on western continental margin of India. Towards NNE it continues into the onland Cambay basin. It is bounded in the northwest by Saurashtra peninsula, north by Diu Arch. Its southern limit is marked by east west trending Vengurla Arch to the South of Ratnagiri and to the east by Indian craton.

Different Tectonic Zones with in the Basin
Five distinct structural provinces with different tectonic and stratigraphic events can be identified within the basin viz. Surat Depression (Tapti-Daman Block) in the north, Panna-Bassein-Heera Block in the east central part, Ratnagiri in the southern part, Mumbai High-/Platform-Deep Continental Shelf (DCS) in the mid western side and Shelf Margin adjoing DCS and the Ratnagiri Shelf.

Surat Depression
It forms the southward extension of the Cambay Basin and to the west it is separated from Saurashtra Basin by Diu Arch. An arm of this Depression extends far south into Panna-Bassein-Heera block (Central Graben) and further south into Ratnagiri block (Vijayadurg Graben). A ‘high’ feature interrupts the north-south continuity of these grabens. A few small-scale grabens radiating from these diastamise and circumscribe horsts in Ratnagiri block. The Surat Depression has numerous structural features of different origins like basement-controlled anticlines, differential compaction over sand bodies encompassed by shale, inversions and growth fault related roll over features.

Panna-Bassein-Heera Block
This block located east of Mumbai High/Platform and south of Surat Depression has three distinct N-S to NW-SE trending tectonic units which lose their identity in Miocene. The western block is a composite high block dissected by a number of small grabens. The Central graben is a syn sedimentary sink during Paleogene and Early Neogene. The eastern block is a gentle eastward rising homocline.

Ratnagiri Block
It is the southward continuation of the Panna-Bassein-Heera block. This block is differentiated into four distinct tectonic units by three sets of NNW-SSE trending enechelon fault systems. The western block is termed ‘Shrivardhan Horst’ and to its east is ‘Vijayadurg Graben’ which is also a syn sedimentary sink during Paleogene and Early Neogene. There is a general southward shallowing of this graben. Adjoining this is ‘Ratnagiri Composite Block’ with a number of ‘highs’ and lows’ and further east, like in the northern block, there is a gradual easterly rising homocline called ‘Jaygad Homocline’.

Mumbai Platform
It is bounded by Shelf Margin to its west and south and by Saurashtra Basin and Surat Depression to its north. Mumbai Platform includes Mumbai high and DCS area. The intervening area between these two is gentle homoclinal rise with a few structural ‘highs’ of different origins. Major part of the Mumbai High area remained positive almost up to Late Oligocene missing much of the sedimentation activity. In comparison to other blocks in the basin, Mumbai block remained relatively stable which probably helped in the deposition of uniform carbonate-shale alternations over Mumbai High during Early Miocene and early part of Middle Miocene, which later accommodated huge accumulations of hydrocarbons making Mumbai High, a Giant Field.

Shelf Margin
Its northern boundary with Saurashtra Basin is indistinct and to its west lies Deep Sea Basin with the western boundary marked by part of a regional ridge ‘Kori High’. Except for the deposition of thin carbonates during Eocene, possibly due to paucity of clastic supply into the basin during this period, the block essentially remained a clastic depocenter throughout Oligocene and Neogene times. During post Eocene times the block experienced continuous sinking with varied intensity to accommodate the enormous clastic material that was being brought into Surat Depression by proto Narmada and Tapti river systems and getting dispersed westward into this block.

Source Rock
There are three major depocenters in the basin viz. Surat Depression in the north, Shelf Margin in the west and Central and Vijayadurg Grabens in the south.

Reservoir Rock
Mumbai offshore basin has been blessed with both clastic and carbonate reservoir facies in almost total Tertiary Section ranging from Paleocene to Middle Miocene.

Commercial production from few wells of Heera Field. Areas SW of Bassein Field containing B-80, B-23A prospects and prospect D-33 in DCS have been identified for pre-development studies along with younger pays. In addition commercial flow has been observed in prospects like B-34, B-59, B-127, Panna East wells etc.

In addition several prospects in Heera-Panna Composite block and BH-DCS block has been tested hydrocarbon in commercial quantities.
Areas identified for development/pre-development studies: