The Cauvery Basin extending Extends along the East Coast of India, bounded by –
08º – 12º 5’ North Latitude , 78º – 800 East Longitude has been under hydrocarbon exploration since late nineteen fifties. 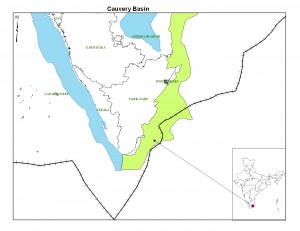 Application of CDP seismic in 1984 considerably increased the pace of exploration resulting in the discovery of several small oil and gas fields. The first deep well for exploration was drilled in 1964.

The Cauvery Basin covers an area of 1.5 lakh sq.km comprising onland (25,000 sq.km) and shallow offshore areas (30,000 sq km). In addition, there is about 95,000 sq km of deep-water offshore areas in the Cauvery Basin. Most of the offshore and onland basinal area is covered by gravity, magnetic and CDP Seismic surveys. Geological map for the outcrop terrain shows the exposed formations.

Category and Basin Type:
Cauvery basin is a pericratonic rift basin and comes under category first. (Basins with established to commercial production.)

The Geological history of the Cauvery Basin began with the rejuvenation of rifting, i.e., creation of a new rift basin during Late Jurassic and Early Cretaceous times

The Cauvery Basin is an intra-cratonic rift basin, divided into a number of sub-parallel horsts and grabens, trending in a general NE-SW direction. The basin came into being as a result of fragmentation of the Gondwana land during drifting of India-SriLanka landmass system away from Antarctica/Australia continental plate in Late Jurassic / Early Cretaceous. The initial rifting caused the formation of NE-SW horst-graben features. Subsequent drifting and rotation caused the development of NW-SE cross faults.

The stratigraphy is worked out from outcrop geology and sub-surface information gathered from seismic and drilling data.