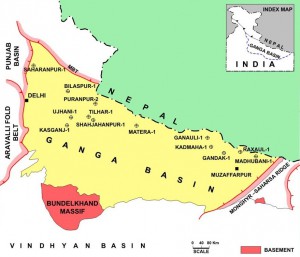 (Precambrian to Cambrian) – overlain by the Himalayan foredeep basin (Tertiary). The Ganga Basin lies in the northern part of India.

Structurally, the Tertiary basin originated due to the development of a linear sag in the crust formed contemporaneously with the upliftment of the Himalaya. This linear depression has been filled with molasse sediments brought from the rising Himalaya in the north and clastic sediments derived from the Vindhyan Proto-continent in the south. It was earlier believed that Paleozoic, Mesozoic and Tertiary rocks underlie alluvium of Ganga basin, but it is now known that Mesozoic rocks have only limited occurrence and are not present in all the depressions of the Ganga Valley.

The subsurface Delhi-Kalka ridge, running in N-S direction, is taken to be western limit of the Tertiary basin. The Monghyr-Saharsa ridge, a promontory of the Chhota Nagpur basement plateau, trending NNE-SSW in the subsurface, forms the eastern limit. The northern limit is defined by the Main Boundary Thrust (MBT), whereas the southern limit is formed by the exposures of the Vindhyan Group of rocks.