Basin Introduction :
Extensive deltaic plain formed by two large east coast rivers, Krishna and Godavari in the state of Andhra Pradesh and the 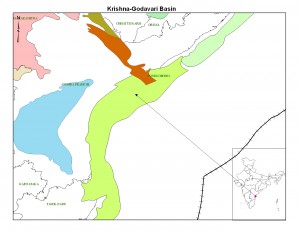 adjoining areas of Bay of Bengal in which these rivers discharge their water is known as Krishna Godavari Basin. The Krishna Godavari Basin is a proven petroliferous basin of continental margin located on the east coast of India .Its onland part covers an area of 15000 sq. km and the offshore part covers an area of 25,000 sq. km up to 1000 m isobath. The basin contains about 5 km thick sediments with several cycles of deposition, ranging in age from Late Carboniferous to Pleistocene.

Gravity-Magnetic surveys, in onland part have been carried out by ONGC over an area of 19,200 sq. km. In offshore area, M/s. Prakla Seismos and GSI acquired the gravity-magnetic data for ONGC. Composite Bouguer gravity and composite magnetic anomaly map

Seismic Coverage
Conventional single fold surveys were initiated in 1965 and upto 1973 about 2,690 line km of data was acquired. CDP surveys commenced in 1973 and so far about 34,642 Line Km. data with foldage varying from 6 to 48 have been acquired. ONGC has also carried out 2,325 Sq. Km. 3D seismic in onland area.

Additionally, during 1972-74, 2,028 km. Refraction data was acquired to study the basement configuration and also shallow reflectors.

In onshore, so far 141 prospects have been probed by 375 exploratory wells by ONGC, out of which 11 oil & gas pools and 31 gas pools have been discovered and most of them are on production. In offshore ,Sso far more than 84 prospects have been probed by 182 exploratory wells . Hydrocarbon accumulations have been proved in 33 of these prospects (11 oil & gas and 22 gas prospects). About nineteen discoveries have been made by Pvt./JV companies so far in NELP blocks (Fifteen Dhirubhai discoveries by RIL in blocks KG-DWN-98/3 and KG-OSN-2001/2, three discoveries by Cairn Energy Pty. Ltd. (CEIL) in block KG-DWN-98/2 within Mio-Pliocene, 3 discovery by ONGC in the block KG-DWN-98/2 within Plio-Pleistocene sandstone of Godavari formation and one discovery by GSPC in block KG-OSN-2001/3 within Lower Cretaceous). To check the above the shallow and a deepwater discoveries.

Tectonic History :
Krishna Godavari Basin is a Continental passive margin pericratonic basin. The basin came into existence following rifting along eastern continental margin of Indian Craton in early Mesozoic. The down to the basement faults which define the series of horst and grabens cascading down towards the ocean are aligned NE-SW along Precambrian Eastern Ghat trend.

Generalized Statrigraphy :
In the northwestern and western margins of the basin, out crops of Achaean crystallines and sediments ranging in age from Late Permian to Pliocene are present. However, major part of the basin is covered by alluvium/sea. The geological map of the basin shows the details of outcrop belt .

The outcrop and sub-crop lithologic information has been gathered from a large numbers of wells drilled in the shelfal area and onland.

The maximum thickness of the sediments in Krishna Godavari basin is around 5000 m. Controlling factor of the thick pile of sediments is presence of long linear Gondwana rift valley. Palaeontological evidences suggest a period of slow sedimentation and subsidence but changes in water depth during deposition.

Krishna-Godavari basin is a proven petroliferous basin with commercial hydrocarbon accumulations in the oldest Permo-Triassic Mandapeta Sandstone onland to the youngest Pleistocene channel levee complexes in deep water offshore. The basin has been endowed with four petroleum systems, which can be classified broadly into two categories viz. Pre-Trappean and Post-Trappean in view of their distinct tectonic and sedimentary characteristics. Seismic imaging of Pre-Trappean section poses problems in terms of data quality.

Permo-Triassic Kommugudem-Mandapeta-Red Bed Petroleum System
This is the oldest known petroleum system in the basin.

It is the most prolific system in the onland part of the basin contributing major part of the onland hydrocarbon production. It has an abnormally pressured source sequence and a reservoir sequence with more than normal pressures.

Vadaparru Shale –Matsyapuri / Ravva Formation-Godavari Clay Petroleum System
Discovery of medium sized fields with liquid hydrocarbon in the Coastal Tract, significant discovery of Ravva Field in the shallow offshore and some very exciting mega discoveries in deep offshore parts of the basin have made this youngest petroleum system, a very important one.

The reservoir facies of Permo-Triassic occur within the well identified source facies at the bottom and overlying Cretaceous argillaceous facies, which act as source as well as cap. In view of the fact that hydrocarbon indications are observed in well KB-4B-1, drilled in the north western part of offshore basin, and also, in well KG-1-B-1, indication of gas with higher hydrocarbon and oil stains in ditch samples collected from Late Paleozoic sediments, imparts the older sequence a fair degree of importance. These older sediments can also be expected to be present upto Krishna island area around the coastal part. The occurrence of gas fields like Mandapeta and Endamuru and indications of hydrocarbons in offshore areas point to the fair potential of this sequence.

A number of gas fields are producing from Paleocene reservoirs, particularly in East Godavari Sub-Basin. The Tatipaka, Pasarlapudi, Kadali and Manepalli are the fields located onland, while, GS-8 is occurring in the offshore part of the basin. The hydrocarbon generation centers in Paleocene indicate fair to rich organic content on the basinal side. The indications of gas and its pressure in this sequence justify good potential for Paleocene in the basin. Ten pools of hydrocarbon have already been discovered in this age group.

The Eocene accumulation of gas is observed in Elamanchili, Tatipaka, and Pasarlapudi etc. Mori prospect is oil producer. These oil fields including GS-38 in offshore area indicate good hydrocarbon potential in Eocene sequence. Hydrocarbon generation centers in Eocene . Reefal limestone and associated shelf sediments of Eocene age form another category of hydrocarbon plays, in the lower deltaic areas of Godavari river and shallow waters of Masulipatnam Bay. Drape folds on tilted narrow fault block may have the potential for both oil and gas entrapment. Eight hydrocarbon pools have already been discovered.

The Mio-Pliocene sequence in offshore part is promising. The commercial hydrocarbon accumulation in Ravva field is well known. The prospects GS-38, G-1 and G-2 are also hydrocarbon bearing in Mio-Pliocene strata. As many as fourteen commercial finds have come from this sequence.